• Description: Discover the jewels of Buenos Aires outside of published guidebooks and traditional highlights that most tourists miss. Scroll (way) down for extensive information and detail!

• Price: USD $50 p/p all tax included. A minimum of 2 people is required. Ask about single person and large group pricing.

• Meet: We will meet at a street corner in Recoleta neighborhood: Santa Fe Avenue at the corner of Callao Avenue outside the McDonald’s.
Look for our guides, wearing 'BA-Walking-Tours' signs.

To get to the meeting point you can take a taxi or subway line “D” (green color). If you take the subway get off at 'Callao' station. Walk 3 blocks to Santa Fe Ave. map here.

• Note: This tour includes uncommonly visited city landmarks that deviate from your typical tourist locations. Because we enter several buildings that we visit, you will get an extra personal experience of each place that most large walking tours won’t be able to offer.
This tour is also meant for people who like architecture, art and culture.

This is not a strenuous walk. At some point (time permitting) we may stop for coffee or refreshments at some emblematic cafe of cultural or historical value. Snacks, drinks, hotel pickup, transportation, foot massage, mid-life-counseling, good sense of humour and gratuities are not included (actually massage, counseling and good sense of humour are not even available!). 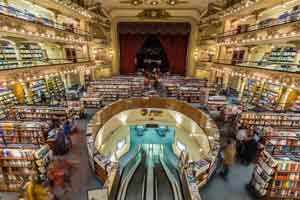 In this distinctive walking tour, first we will connect some unique spots that are not in the touristic circuit. Then, you will enjoy discovering the jewels of a neighborhood (not listed in guidebooks) that you would never have the opportunity to explore if you didn't know a local. Ateneo bookshop: In this building there was a theatre named Teatro Gran Splendid that opened in 1919. The building was subsequently renovated and in 2000 converted into a book and music shop. The cinema seating was removed and in its place book shelves were installed. Chairs are provided throughout the building, including the still-intact theatre boxes, where customers can dip into books before purchase, and there is now a café at the back of what was once the stage. The ceiling, the ornate carvings, the stage curtains, the auditorium lighting and many architectural details remain. Despite the changes, the building still retains the feeling of the grand theatre it once was. The Guardian, a prominent British newspaper, named El Ateneo second in its 2008 list of the World's Ten Best Bookshops .Over a million people walk through its doors annually. The eclectic building features ceiling frescoes painted by the Italian artist Nazareno Orlandi. The theatre staged a variety of performances, including appearances by the tango singer Carlos Gardel and tango contests. In one of the side aisles there are pictures that tell the story of the theater. 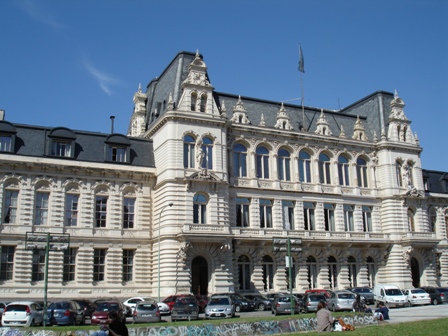 The whole area where the plaza sits belonged to Juan Rodriguez. Here he had his house. One night he heard noises outside the house. He thought that there was a thief on his property and he fired his gun. The following morning, he found the dead body of his beloved neighbor. The courts found him not guilty but he was so upset by the incident that he decided to build a “chapel of relief”. After his death, the old chapel was forgotten and abandoned. Then, Petronila Rodríguez de Rojas, his daughter, decided to build a new temple.

Petronila left the property to the city in her will. The will stipulated that a girls' school should be built, as well a museum and library facilities; the Petronila Rodríguez de Rojas School was inaugurated in 1893. The palace's design is eclectic, inspired by French, Spanish and German architecture. Nowadays, it is the location of the Argentine Ministry of Education and it is called Sarmiento’s Palace.

The palace of flowing waters: This building was designed as a water pumping station in 1877 and completed in 1894. It was functional for 20 years.

Many people pass by this massive, high Victorian structure and stop in wonder. The Buenos Aires's Water Palace is a fantastic structure of more than 300,000 multicolored tiles and glazed and enamel bricks shipped from England. Its original interior engineering components were made in various European countries, largely Belgium.

It is a palace with no rooms inside since it was built to store water. Inside there are 180 columns that together with the walls used to bear the weight of 12 water tanks with a capacity of 72 million liters of water. Part of the original engineering works has been removed.

The palace houses a water company’s offices. It also contains one of the most unusual museums in the whole city. Explaining the history of water sanitation, this museum is home to hundreds of toilets and faucets and giant sewer pipes are also on display. 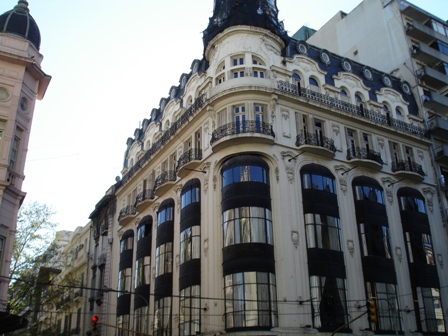 French style building (1912) In this 8-story building, as it was customary at that time, there was a shop and offices with great halls of exhibitions and sales rooms that were located on the ground floor and the first two floors. The owner of the business was a French woman who sold dresses, hats, perfumes etc. The walls were made of bricks imported from France. Nowadays it is an office building. Abasto Shopping: The Abasto shopping mall is an impressive building. Built in 1893 as a fruit and vegetable wholesale market, the original building went through a redesign by a Slovenian architect Victor Sulcic in the 1930s. It is Argentina's first building constructed with reinforced concrete on the outside and inside. Victor Sulcic also built the Boca Juniors soccer Stadium. Sulcic was able to design the building in only two days. This art deco building looks like a Roman Basilica.

By the time the market was built, many immigrants came here to work at the market and the area was also populated with canteens, theaters and brothels.

Its history is closely associated with the life and career of the most popular tango singer Carlos Gardel who lived a few blocks from the Market.

This central market was relocated in 1984. It is now located outside the city. Eventually, someone had the idea to make this a mall, and in 1999 it was reopened as such.

The original building & structure remain largely untouched. Its Art Deco interior and exteriors are worth a visit whether you’re shopping or not.

Inside there is a children’s museum. The museum is a small scale representation of BA that children can play in. With the Jewish population largely intact in the area, the mall also houses a Kosher McDonalds. 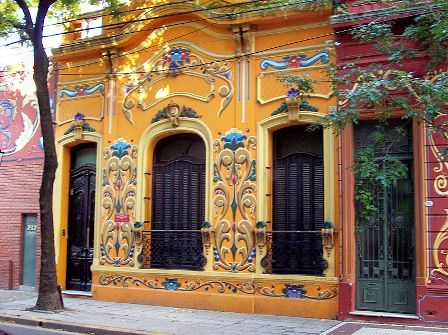 Fileteado: The houses around Abasto, particularly near the Gardel museum are covered in fileteado artwork. Fileteado, the style of painting associated with Buenos Aires began in the gray carts pulled by horses that transported fruits, milk, groceries and bread at the end of the 19th century. Later it was used for decorating almost anything from guitars, accordions, coffins, sneakers, signs, taxis, trucks, magazine and newspapers stands, to cars and buses. As it turns out, the city is a treasure trove of examples. Filetes (the lines in fileteado style) are usually full of colored ornaments and symmetries completed with poetic phrases, humorous, emotional or philosophical sayings. The filetes were born as simple ornaments, becoming an emblematic form of art for the city. Many of its initiators were European immigrants mostly from Italy, who brought from Europe some elements that were mixed with the local tradition, creating a very typical Argentine style. These Italian immigrants were working as cart builders in the early 20th century and fileteado was developed at the same time as tango. The fileteado was recognized as an art after 1970, when it was exhibited for the first time. 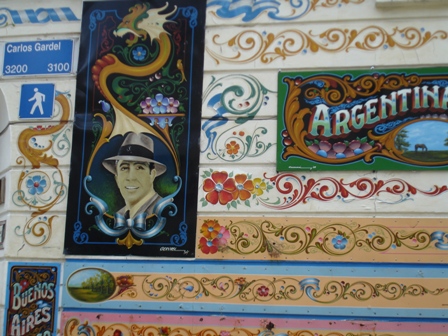 The painter who decorated the carts was called Fileteador, because he performed the job with long-threaded paintbrushes also called 'Brushes for making filetes'. This is a word derived from the Latin word 'Filum' which means 'Thread', referring to the art in a fine line that serves as the art. Since it was something that was executed after a cart was done, but before the payment was received, it was a task that had to be performed quickly. At that time, the number of specialist painters increased dramatically. One of them was a captain of the Merchant Navy of Italy, Salvador Venturo who established himself in Buenos Aires, where he dedicated to Fileteado, incorporating a lot of motifs from his home country. Miguel, his son studied painting and enhanced his father's technique, being considered by many the painter who shaped the Filete. The introduction of birds, flowers, diamonds and dragons in the motifs is attributed to him, as well as the design of letters in the doors of trucks. Fileteado is characterized by intertwining forms, with stylized lines and flowered, climbing plants, ribbons, usually a brightly colored painting, slogans; and more often that not, the Argentine flag. Other characteristics are: The use of shading and highlighting to create the illusion of depth The preferred use of a Gothic font style or bold or highly detailed letters The almost obsessive recurrence of symmetry The framing of each composition when it is finished The efficient use of available space The use of symbolism (the horseshoe as a symbol of good luck, the dragon as a symbol of strength). Join us on this tour for a very memorable experience.